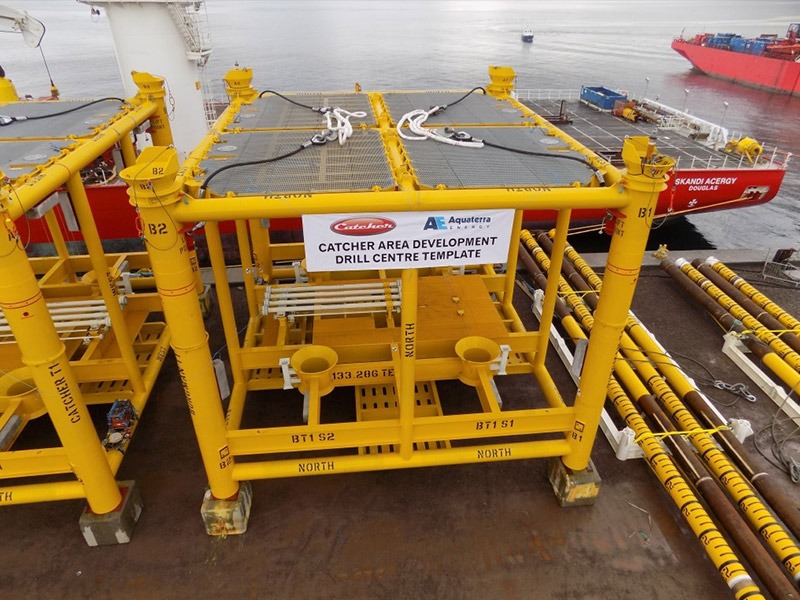 Global Energy Group (GEG), a Scotland-headquartered energy sector service provider, has played a key role, together with local businesses, in supporting Premier Oil reach first oil on the Catcher field in the North Sea.  This was safely achieved on 23 December 2017.

Initial production will be at an expected rate of around 10,000 barrels of oil per day (bopd), which will then be ramped up in phases with production from the Varadero field followed by the Burgman field over the next six months to approximately 60,000 bopd. adding 30,000 bopd (net) to Premier’s daily production.

GEG’s multi-faceted scope of work began in 2014 and is worth in excess of USD $40 million to date.  This included extensive fabrication work for a number of UK energy and engineering firms at the company’s Invergordon and Nigg facilities on the Cromarty Firth.  It comprised of constructing six bundled towheads and associated spools for Subsea 7, six subsea drill centre templates (DCTs) for Aquaterra Energy, as well as the Spring-lok units for Britannia Engineering Consultancy.

GEG also welcomed the BW Catcher, a floating production storage and offloading (FPSO) vessel, to its Nigg Energy Park for a short port call prior to sailing to the Catcher field in October for hook-up of the submerged turret production buoy mooring system.  The FPSO is designed to receive and process up to 60,000 bopd and has a minimum lease term of seven years.

GEG also provided a vast amount of logistics support to the development via its Logistics and Shipping business, GPSS.

Daniel McAteer, Chief Business Development Officer from GEG, said: “To have been involved in the many facets of the construction and logistics of the Catcher field development is extremely important to us and showcases our field development support capability and the technical talent and engineering expertise of our UK-based oil and gas clients.

“GEG would like to take this opportunity to congratulate Premier Oil on achieving first oil and wish all contractors involved with a successful field life.  We look forward to supporting the Catcher development going forward.”

Subsea 7, as part of its largest-ever UK EPIC (engineering, procurement, installation and construction) contract with Premier Oil (valued in excess of $460 million), designed, developed and installed six towhead structures as part of three pipeline bundle systems, as well as associated pipeline tie-in and well spools, all fabricated by GEG. GEG also provided quayside services at Nigg Energy Park to support numerous vessel loadouts.  Fabrication for Subsea 7 started in early 2015 and work packages have continued since then, with a total fabricated tonnage in excess of 1,500 tonnes to date.  Subsea 7 and GEG will continue to work together on further work scopes for this project and others throughout 2018.

William Geddes, Project Manager with Subsea 7, said: “GEG has been pivotal in the success of the Premier Catcher project for Subsea 7.  We place high expectations on fabricators and are delighted with how GEG has maintained the necessary focus on safety, quality, and on-time delivery throughout the course of the project.”

Aquaterra Energy’s six ‘fishing friendly’ subsea DCTs for Catcher each weighed more than 100 tonnes and are designed to withstand environmental, installation and jacket docking loads across a range of seabed conditions and operational requirements.  The DCTs were installed and piled by Subsea 7 as part of their EPIC scope.  The Catcher project followed an earlier successful contract with Premier Oil for DCTs delivered in Vietnam.

George Morrison, managing director of Aquaterra Energy, added: “This was an extremely prestigious project and played to our strength in delivering the full project scope from design and structural analysis, through procurement, fabrication, assembly and finally, load-out.  The six steel templates, complete with super-duplex piping manifolds, enabled the drilling of production and water injection wells without the need for rig moves for each cluster of wells.”

Craig Matthew, Catcher Area Development Manager with Premier Oil, said: ‘Premier Oil would like to thank GEG for their contribution to the Catcher Project supporting our key contractor’s BW Offshore, Subsea 7, Aquaterra Energy and Britannia Engineering Consultancy. From a project development perspective, having access to the facilities at Nigg and the versatile range of services from GEG, offers major oil and gas projects the opportunity to fabricate, effectively marshall and manage equipment and to support installation campaigns in a very flexible manner.”

The Catcher Area Development is located in Block 28/9 of the UK Continental Shelf approximately 110 miles east of Aberdeen.  The development consists of three discoveries, Catcher, Varadero and Burgman, located in a water depth of approximately 90 metres.  Each field has been developed as a subsea tie-back to the FPSO which will export oil by shuttle tanker and gas by a 10″ pipeline connected to the existing Fulmar pipeline.